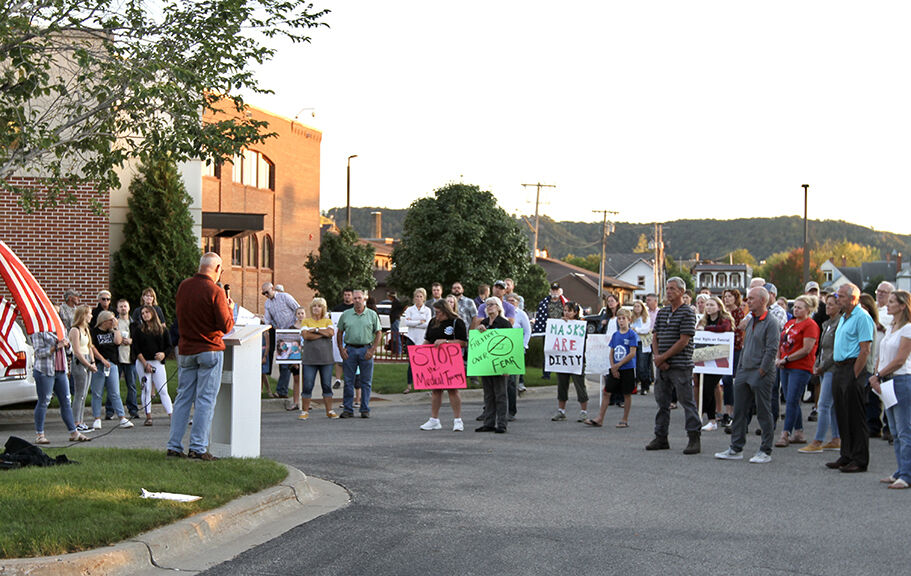 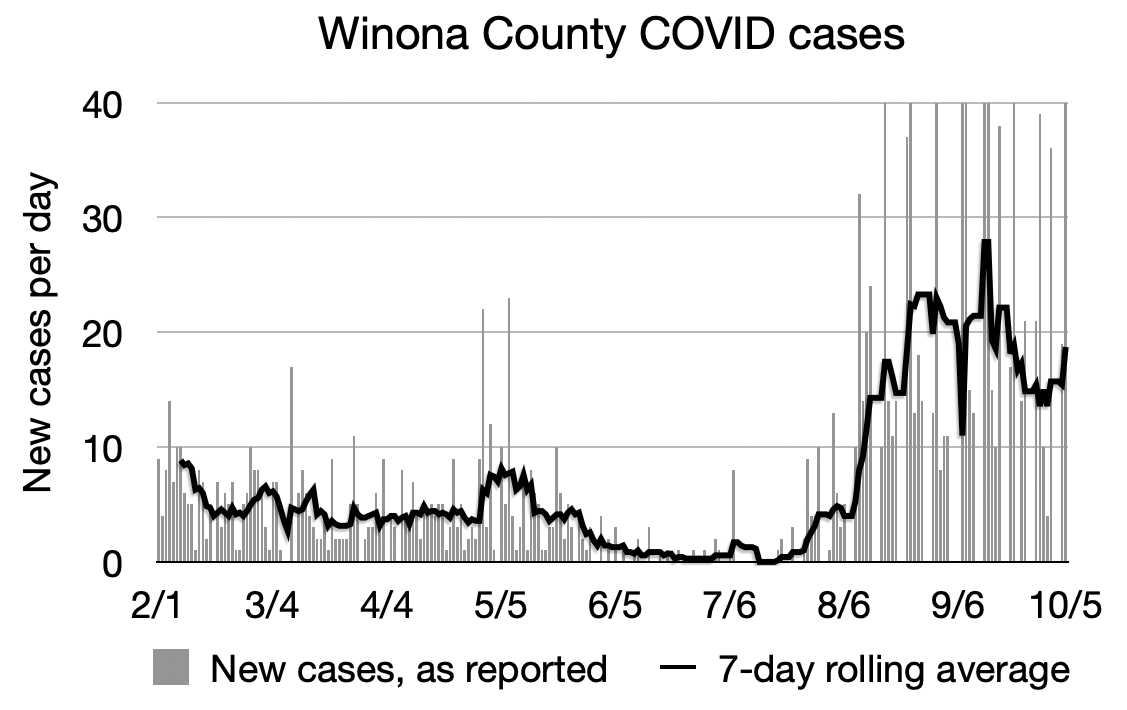 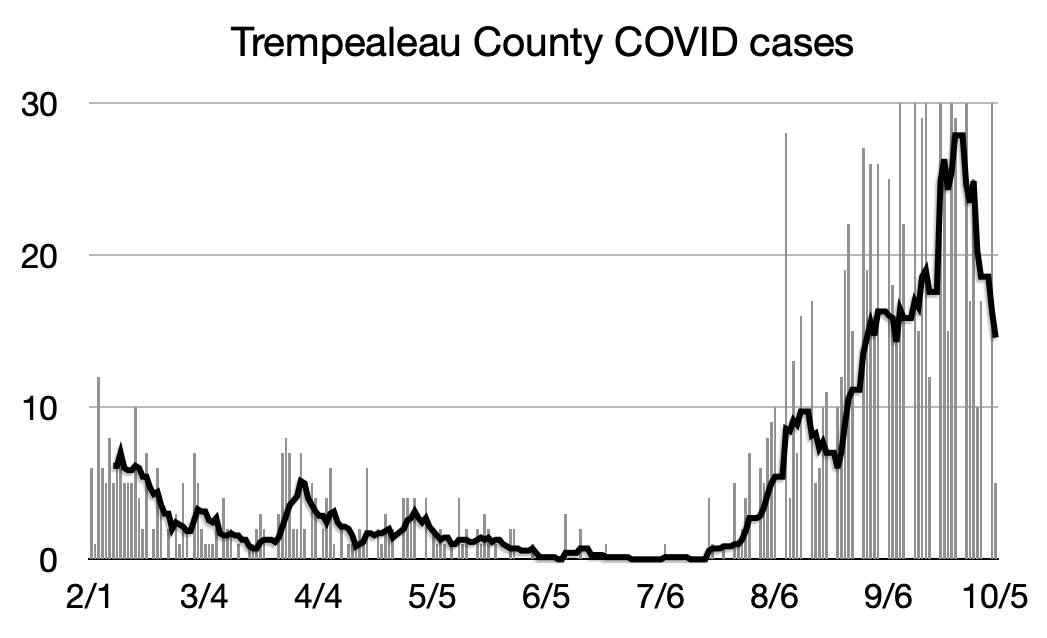 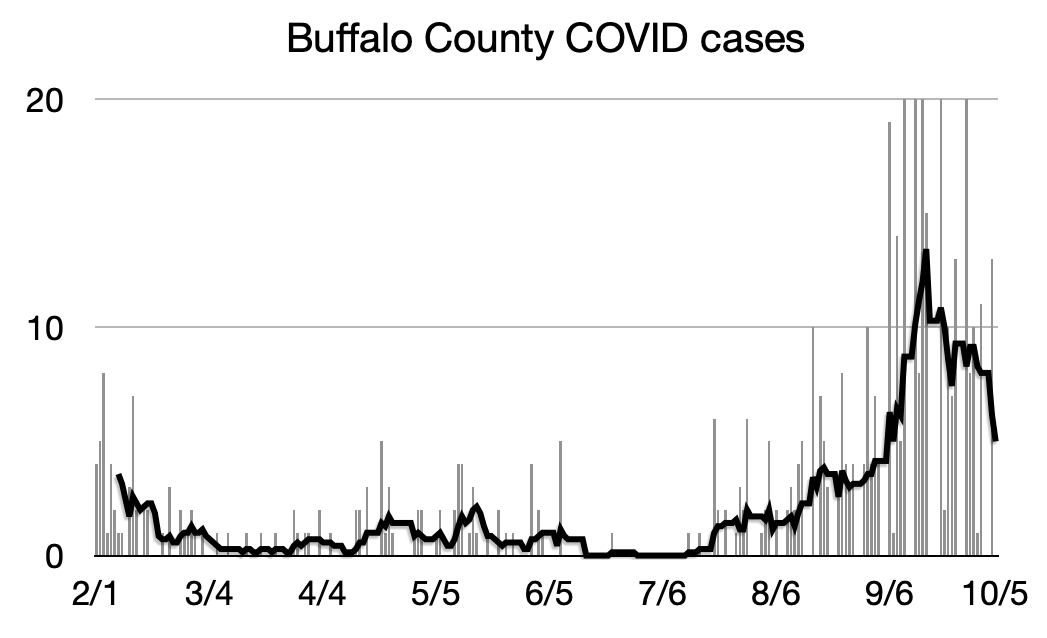 The Winona County Board’s potential mask mandate is still slowly advancing, but with local COVID infections declining somewhat, County Board members Greg Olson and Marie Kovecsi said local infection trends will influence their decision on whether a mandate is necessary. A public hearing and final vote on the proposal is expected in late October or November. The County Board got a taste for what that hearing may be like last week, when scores of citizens held a rally in opposition to masks outside the county offices.

After shooting up in August, local COVID infections have declined some over the past three weeks. In Trempealeau and Buffalo counties, cases are down markedly, with 102 new cases in Trempealeau County this week, down from 164 last week. In Buffalo County, there were 34 new cases this week, down from 64 last week. In Winona County, the trend is a little mixed. COVID infections rebounded slightly, with 135 new cases this week, up from a low of 95 cases last week. However, that is still significantly lower than the recent peak of 195 cases in one week in mid-September.

“I think we still need to be cautious. I think it’s a positive sign, although I think we had 40-some cases today,” Winona County Emergency Management Director Ben Klinger said in an interview last Friday, when 42 new cases were reported. “I don’t think we’re at a place where we see a trend yet,” he said when asked whether things were getting better, “but every day where we see positive [movement], we’re closer to that.”

“I think it’s a little too soon to tell what we’re seeing,” Winona County Public

Health Supervisor Melanie Tatge echoed. If cases decline now, there is still reason to be concerned about a rise later this winter, with holiday gatherings and more people indoors, she noted. On a positive note, Tatge said the Pfizer vaccine may be approved for children ages 5-11, possibly as soon as this month.

In an interview, Olson said he supports passing an ordinance that would give the County Board the power to adopt a mask mandate or other emergency public health measures regardless of whether infections are improving. Whether any mandate is necessary depends on the situation on the ground, he said.

“If it protects public safety, if our cases are rising to a point, then I think you do what you have to do,” Olson stated. “I don’t think that will be the case, but I will support having the ordinance on the books.” He continued, “As far as the masks, I’m hoping that we don’t have to do anything. I’m hoping that cases decline and are at a level that we don’t have to have a mask ordinance. That would be good for the community, good for everybody.”

“I’m still in the midst of things,” Kovecsi said when asked about whether her views on a mask mandate had changed. “One major thing that’s going to be a part of it is the numbers and the numbers are changing.” However, she said that regardless of infection trends, young children are still unable to be vaccinated and might benefit from wider masking. Asked if there was a certain point where she would no longer consider a mask mandate necessary, Kovecsi responded, “I don’t know. I’m still researching.” She stressed the underlying goal of any action from the county was to protect people’s health. “I don’t want anybody else to get sick. I certainly don’t want anybody else to die. I don’t want anybody to go to the hospital,” she said.

Along with County Board member Chris Meyer, Olson and Kovecsi have been part of a majority on the board that supported a possible mask mandate. County Board members Steve Jacob and Marcia Ward opposed the measure, saying a mandate was the wrong approach and questioning the effectiveness of masks.

The speakers described masks as preventing recognition of facial expression and human connection. Many argued a mask mandate would be an overreach of government power and a violation of their civil liberties. Others said citizens should be allowed to make their own choices about how  and whether to mitigate the risk of spreading COVID. “Freedom is risky,” Stockton resident Dave Eastep said.

Rollingstone resident Paul Kreidermacher held up a petition against any county mask mandate that he said had nearly 400 signatures. “There’s one thing these people all have in common, they do not want the County Board to have emergency powers to put on mandates … It should be up to the voters, not five people,” he said.

Many of the speakers claimed that masks do nothing to prevent the spread of COVID. The U.S. Centers for Disease Control (CDC), Minnesota Department of Health, Mayo Clinic, Gundersen Health and Winona Health all advise that masks help reduce COVID transmission.

Winona County currently requires face masks in its own buildings, including the County Office Building that hosted last week’s meeting. However, many attendees, including many citizens who spoke against masks, did not wear them.

“The direction to the staff is not to confront anyone regarding a mask,” County Administrator Ken Fritz said. He explained that county policy technically requires masks in county buildings when social distancing is not possible; however, when people come in without masks, the policy directs staff to offer those people masks, but not insist that they must wear them to enter. Winona City Manager Steve Sarvi said earlier this summer city staff used the same approach at city hall.

“The rationale for that is, first of all we don’t want our employees in confrontation with the public,” Fritz explained. “That doesn’t lead to good results. And secondly you don’t know if they have a medical exemption or some other reason they can’t wear a mask, and it’s not up to us to determine if they can wear a mask. We’ve indicated staff should offer them a mask and leave it at that.”

Along with an armed patrol deputy and Sheriff Ron Ganrude, who was also armed, Klinger helped man the door at last Tuesday’s meeting. He confirmed attendees were offered masks, but few accepted them.

Asked if a mask mandate would ask local businesses to do something — strictly enforce mask requirements — that the county itself is not willing to do, Kovecsi responded, “I don’t know, that’s a hypothetical.” Kovecsi continued, “I don’t have the solution … In a way it comes back to misinformation. What is causing people to deny themselves and the people around them a minimal amount of protection?”

Olson responded to the same question, “I think everybody is in a situation where they want to avoid confrontation. But I think [last week’s meeting] pointed out the very basis for why mandates sometimes become necessary. I read a lot about 1968 and when they did the seatbelt, many people were against it, but they had to mandate it because people wouldn’t wear them … Here we have a sign on the door, asking people to wear masks, and they just blatantly refuse. The very people who want to fight the mandate are the very reason a mandate might be necessary.”

Asked how a mask mandate should be enforced, Olson responded, “I think that for the most part, I believe in society, I believe in our citizens and I believe that when asked, they’re going to do the right thing, and there are always going to be people who won’t.”

Fritz pointed out that the way the county enforces its current policy and the way it might enforce a possible countywide mask mandate in its own buildings may be different. “If the County Board creates a more restrictive policy, we would use that,” he said.

As for the practical considerations of enforcing a mask mandate, Fritz continued, “My recommendation would be that anything that is implemented should be crafted to avoid creating those conflicts … Our experience has been that it’s very difficult to have frontline personnel enforce something like that.”

Earlier in the meeting, Winona Area Chamber President Christie Ransom highlighted the same issue, asking the board not to pass a mandate. “In one day of the city of Winona’s mandate, I talked to five business owners that had fights in their businesses.” That is not something small businesses are equipped to deal with, she added.