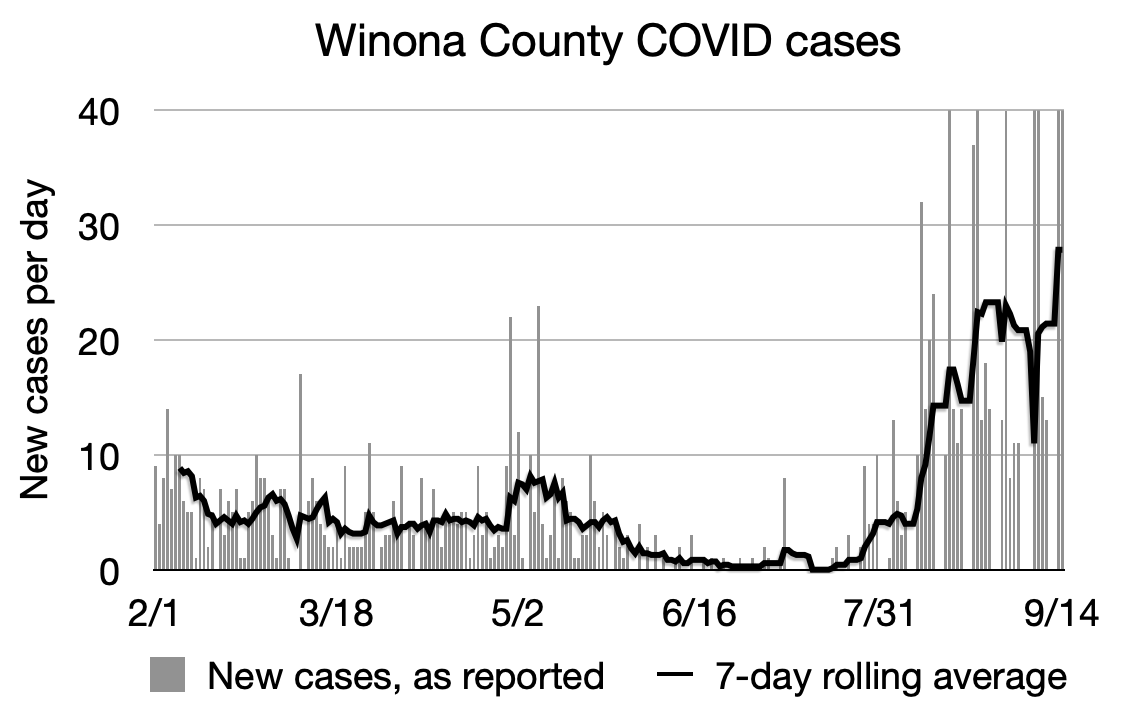 There were 195 new COVID infections and one new hospitalization in Winona County this week, up from

146 infections last week, not counting a dip in reporting due to the Labor Day holiday. In Trempealeau County, COVID cases doubled from 35 last week to 78 this week and two new deaths were reported. Buffalo County saw 116 new infections, on par with last week’s 111. 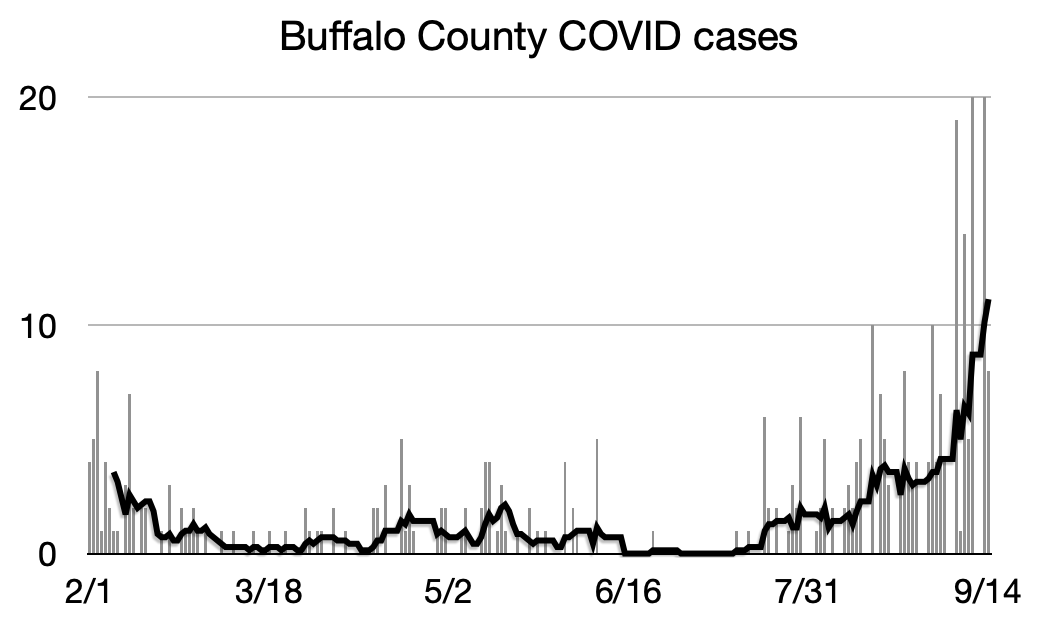 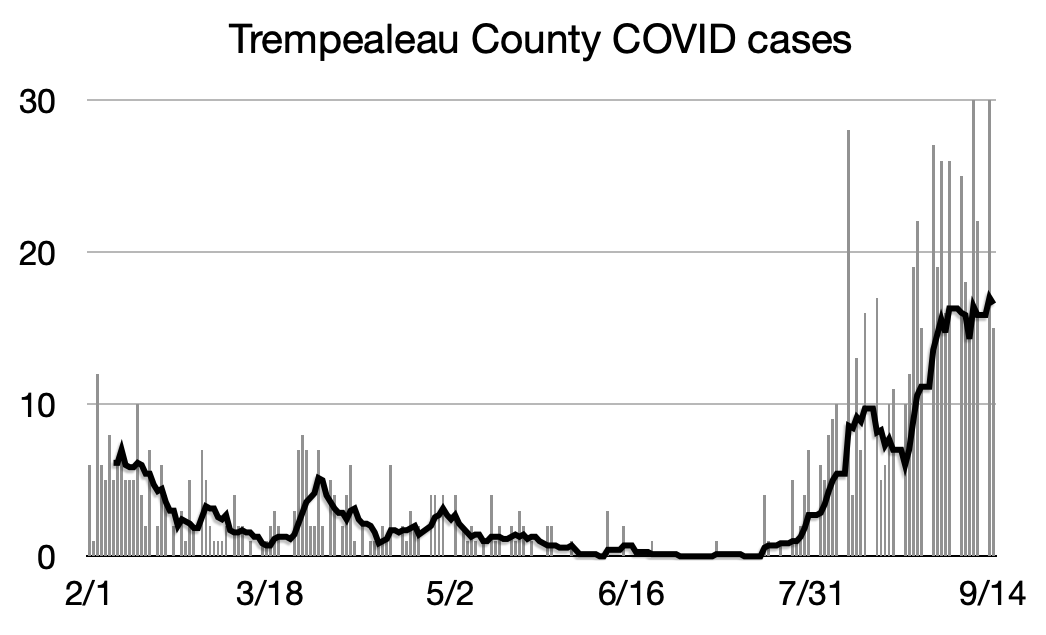 There were 195 new COVID infections and one new hospitalization in Winona County this week, up from

146 infections last week, not counting a dip in reporting due to the Labor Day holiday. In Trempealeau County, COVID cases doubled from 35 last week to 78 this week and two new deaths were reported. Buffalo County saw 116 new infections, on par with last week’s 111.

Nearly three weeks after the city of Winona’s short-lived mask mandate was rescinded, the Winona County Board is still pursuing its own. The move would make the county the only one in the state with a local mask order. The board is not likely to hold a public hearing and vote on the proposal until mid-October.

“I think it was a very political decision versus a public health decision,” County Board member Greg Olson said of the Winona City Council’s 4-3 vote to rescind Mayor Scott Sherman’s mask mandate 34 hours after it began. Olson said he preferred voluntary measures over mandatory ones but also expressed some discouragement that local people were not voluntarily taking the steps needed to slow the virus. “I’m very frustrated. This community could come together. It isn’t,” Olson said.

“Yes. The bottom line is yes,” County Board member Chris Meyer said when asked if she still was interested in a countywide mask requirement. With several weeks before the board is likely to vote, she added, “There’s a lot of things that could happen between now and then.”

With the rise of the more infectious delta variant, local COVID infections and hospitalizations shot up in August and kept climbing. In the past seven days, there were 195 new infections in Winona County, up from a weekly rate of 100 cases one month ago and zero cases two months ago. Hospitals in the region are feeling the strain from the rise in severely ill patients and staff stressed by 18 months of battling the virus. According to the Minnesota Department of Health (MDH), Southeast Minnesota hospitals are operating at 95.5 percent capacity.

Public health officials have stressed, most of all, the importance of vaccinations in preventing infections, hospitalizations, and deaths. They have also consistently advocated for a multi-layered approach to risk reduction, with testing, quarantining, masking, hand washing, and social distancing all working together to stymie the virus’ spread.

Democratic Minnesota Governor Tim Walz ended his statewide mask mandate earlier this summer and has not enacted a new one. “Obviously if things get to where we saw in November and December [2020] we would have to have conversations about what we would do. That’s not happening now,” he told KMSP Fox 9 on August 26, when Southeast Minnesota hospitals were nearly as full as they are now.

On August 24, the County Board voted 3-2 — with Meyer, Olson, and Commissioner Marie Kovecsi in the majority — to pursue a mask mandate.

“I am mostly interested in public safety,” Meyer said of her support for a mask order. “[Masking] is not 100 percent, but it is one more chance to reduce the amount of spread,” she added. “Really I am just trying to keep people safe. If we could get our vaccination rates up. That would be awesome, and if there are ways we can do that with voluntary measures, incentive programs.” The county recently launched a vaccine promotion advertising campaign. Fifty-two percent of the county’s total population is fully vaccinated, according to MDH. “If we can achieve it voluntarily, OK, I’m happy to work on that,” Meyer said. “If we can’t. Well, there are other steps that I feel compelled — that it’s part of my job on the public health board to stop the spread of infectious diseases.”

Pressed on whether he still supports a mask mandate, Olson said, “At this point, I have been positive toward that consideration. I have not come to the point of making a decision on that.” He continued, “Any kind of mandate seems to have a real negative connotation to it … I’m weighing all of these things carefully, but ultimately public health is the number one priority.”

Olson said that after some of Winona Area Chamber of Commerce’s pushback to the city and county’s mask orders, county officials approached chamber leaders proposing a vaccine promotion campaign, in which vaccinated customers could get discounts at local businesses, as an incentive to be vaccinated. The chamber declined. “Last I heard, they said it’s too political,” Olson told the Post. “It’s too political to do anything like that to help. It’s not too political to be anti-mask.”

“We have just steered clear of anything polarizing,” Chamber President Christie Ransom said of the chamber declining the county’s vaccine campaign proposal. “We’re not against masking or vaccinating or for or against either of those things,” she continued. “I think that’s the choice of the people, but I am very against mandating something that will negatively affect our businesses.” She added that the chamber doesn’t have the staff to lead such a campaign right now and argued that offering rewards for getting a shot would be a better incentive than rewarding people who are already fully vaccinated. Asked if more vaccinations would help local businesses, Ransom said, “Do I think that more people getting vaccinated will help over time? Perhaps. I’m not here to argue the science. I am vaccinated … I don’t think it’s my place to say you have to do that or you have to do this.” She added, “We support vaccinations and we support masks, but if people aren’t going to wear them or aren’t going to get vaccinated, I’m not here to put that down either. That’s their choice.”

“It is driving me up a wall,” Olson said of people and businesses unwillingness to embrace masks and vaccinations. For Olson, it was akin to refusing to help one’s neighbors in a natural disaster. In the flood of 1965, Olson said, “Everyone, the whole community joined together to help each other, and the first thing they said was at least nobody got hurt or killed. So their health was their first concern, even though they may have lost a home or lost everything. Now our health is the last thing we think about … This is just like a flood we can’t see, and the dam is about to break unless we all work together.” He added, “If nobody will work together, we have to take other measures that nobody likes.”

The county’s pursuit of a mask mandate is moving slowly because, while the city had an emergency ordinance in place that empowered the city to issue a mask mandate, Winona County Attorney Karin Sonneman said the county does not. She advised the County Board to create one before adopting a mask mandate. Sonneman’s office is still drafting the proposed ordinance, and the county needs to finalize that before it can set a public hearing. County Administrator Ken Fritz said the draft ordinance should be ready for the board’s September 28 meeting. Add on the 10-day notice period and time to organize what Fritz expects to be a very well-attended hearing, and the county is on track for a mid-October hearing and vote. The county could move slightly more quickly by scheduling special meetings of the County Board, but Meyer and Olson said they were not interested in trying to rush things.

“Maybe we wouldn’t even have a public hearing on it until — now we’re talking October,” Meyer said, “And it depends on where the case counts are.”

“We could be on the downswing by the time this all comes about, but in the meantime, we’d have an ordinance that if in the future we need to act for a public health emergency or anything else, we can act,” Olson said.

The County Board got a taste yesterday of the kind of pushback they might see at a public hearing. Six citizens, mostly Winona residents, spoke against any mask mandate at Tuesday’s board meeting, with many claiming — contrary to the conclusions of the U.S. Centers for Disease Control, Minnesota Department of Health, American Medical Association, and local doctors — that masks do not help reduce COVID transmission. “It’s time to end the cycle of masking, distancing, shutdowns, et cetera,” Winonan Eric Wollan said. “Government leads by encouraging residents and businesses to be responsible, not by dictating or mandating action,” Winona resident and 2020 County Board candidate Craig Zeches said.

Conversely, numerous citizens have criticized the Winona City Council for revoking the city’s mask mandate and urged the County Board to take action. Sharing his daughter’s experience treating critically ill COVID patients in an intensive care unit, St. Charles City Council member Dave Kramer told the County Board, “I would just recommend as the elected board responsible for health and welfare in the county that you just consider doing appropriate things along these lines to do what we can to keep people safe.”

Get to know fellow artists, RAA at Art Schmooze Dec. 10