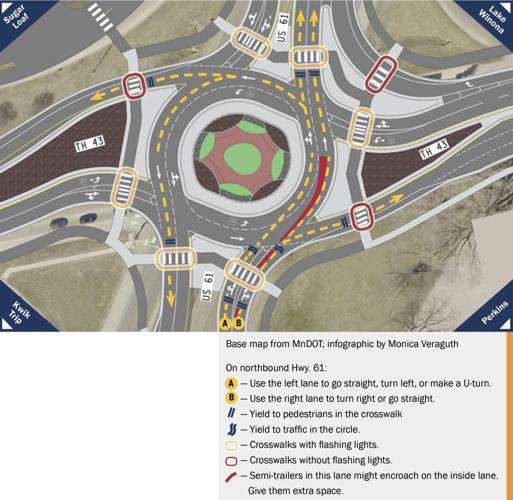 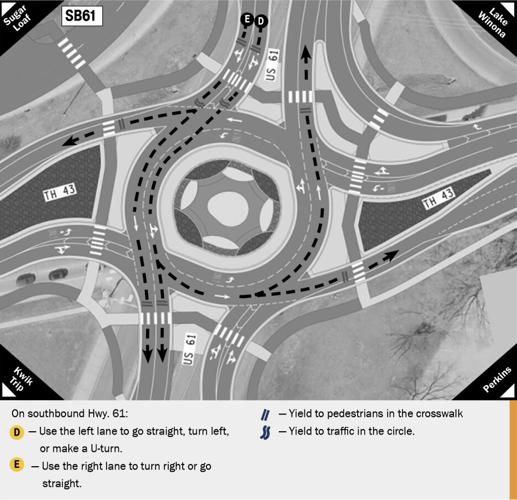 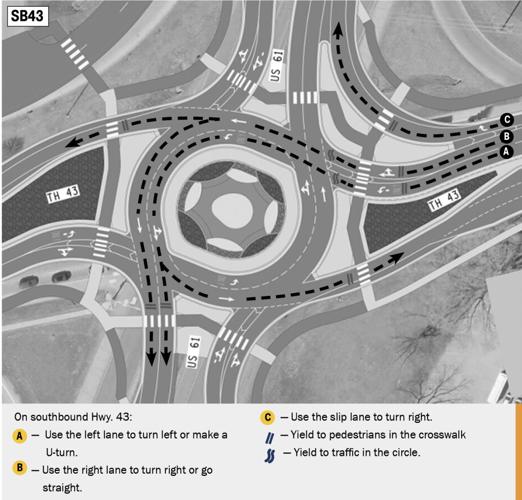 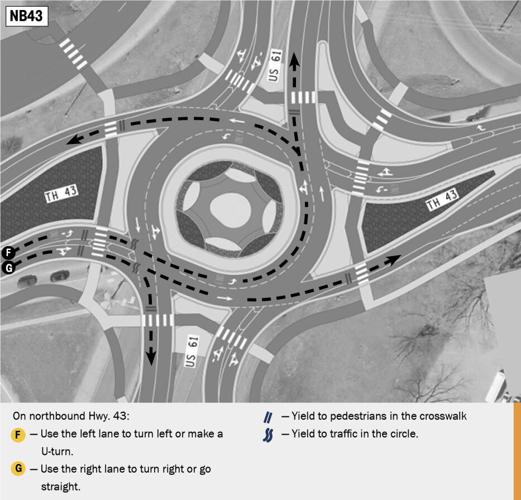 by CHRIS ROGERS and CESAR SALAZAR

The first of four new roundabouts in Winona is expected to open sometime next week, according to the Minnesota Department of Transportation (MnDOT). Following months of road work, MnDOT contractors are putting on the finishing touches on a new roundabout at the intersection of highways 61 and 43, meaning some Winonans might have to brush up on their roundabout-driving skills.

The new roundabout will be one of the busiest — if not the busiest — in Minnesota, and replaces a set of stoplights that MnDOT officials said was one of the worst hot spots for crashes in Southeast Minnesota. Congestion and delays were also an issue at the intersection. MnDOT officials believe the new roundabout will address these issues by reducing serious crashes and improving traffic flow.

1. Slow down. Slow down and be ready to stop as you approach the roundabout.

5. Don’t stop to let vehicles in. A common mistake among drivers is stopping in the middle of the roundabout to let other vehicles enter the roundabout. Don’t stop in the circle except to yield to pedestrians or avoid a collision.

6. Avoid changing lanes in the roundabout. While changing lanes within the roundabout is technically allowed, most roundabout guides advise against it.  “Once you’re in the circle, you generally want to follow whatever is designated for that lane, but obviously if there’s no one in the center lane, there’s no reason why you couldn’t signal in the circle to try to change [lanes],” Tsang said. “… It’s generally not recommended, but it’s allowable. You just have to be careful,” Tsang said.

7. Use your signal, thoughtfully. Tsang and District Six Director of Public Engagement and Communications Mike Dougherty said that signaling when exiting a roundabout is not required by law, but it’s a good idea. It helps everyone know what to expect, Dougherty said. There is one exception: Tsang advised against using a right turn signal when using the center lane to exit straight ahead, as other drivers could misinterpret it as signaling a lane change.

8. Give large trucks extra space. Semi-trailers in the outside lane might straddle both lanes as they enter the roundabout or encroach on the inside lane as they go around the circle. Tsang said that while it’s possible for semi-trailers to navigate the roundabout without encroaching, it’s a good idea for other drivers to give them extra space.

Because the 61/43 traffic circle is a multi-lane roundabout, drivers will need to figure out which lane to take. Drivers don’t need to feel like they are going in blind, though. The legs leading up to the roundabout will have overhead signage and road markers indicating which lane to take. The signage will be far enough ahead to give time to drivers to decide, according to Dougherty.

Permanent overhead signage may not be ready in time for next week’s expected opening, but, if not, there will be temporary signage in place prior to the roundabout opening, Dougherty said.

There are differences in the lane structure on Highway 43 and Highway 61. On Highway 43, the inside lanes of the roundabout are specifically designated for only left turns. This contrasts with Highway 61’s inside lanes, on which drivers may turn left or go straight.

Check out the infographics above to see which lanes to use in the new multi-lane roundabout.

At the old intersection of highways 61 and 43, pedestrians had to cross up to six lanes of traffic in a short time window. With the new roundabout, pedestrians will only have to cross a lane or two at a time and will only have to worry about traffic coming from one direction at a time, thanks to median islands breaking up the different legs of the roundabout. However, there will be no stoplight to halt vehicles for them.

Pedestrians should wait for a break in traffic to step out into the crosswalk and make eye contact with oncoming drivers to ensure they do, in fact, see them and will stop. “You don’t just step off the curb without looking,” Dougherty said. “You need to — as you do at any intersection you’re at — make that eye contact with the motorist and make sure they’re stopping.”

At the roundabout entrances, drivers will already be prepared to stop, but both motorists and pedestrians should be extra careful at roundabout exits, where drivers may be thinking about accelerating down the highway and less focused on being prepared to stop for pedestrians in the crosswalk. “If you’re crossing an exit leg, you should be extra careful,” Tsang advised. He said, “Human nature says while I’m in the circle, I want to get out of the circle.” He added that MnDOT strongly encourages pedestrians at the exit lanes to make eye contact before stepping out and “don’t automatically assume that the vehicle will wait for you.”

At all of the two-lane crossings, there will be flashing lights — which pedestrians can activate by pressing a button — telling drivers to stop at the crosswalks. On two legs of the 61/43 roundabout, there will be no flashing lights. These are both crosswalks that only cross one lane, at the roundabout exits for northbound and southbound Highway 43 (see infographic page 1A). Tsang and Dougherty said that because there’s only one lane to cross, MnDOT officials did not believe flashing lights were needed there.

Asked if those two crosswalks would benefit from flashing lights, Tsang responded, “It could benefit, but like I said earlier, it’s one lane. It’s not a multi-lane, and generally speaking we try to capture the attention of the motorist if there are two lanes.” He added, “We could put one in if the city wanted.”

MnDOT added some flashing lights to the design in response to previous concerns from Winona City Council members.

Tsang also said that semi-trailers will be something that drivers will have to be more cautious about. For trucks on the inside lane, the center of the roundabout circle will have the truck aprons — a mountable curb —  to allow truck drivers to have some extra leg room, but in the outside lane, semi-trailers might need to straddle both lanes on occasion. “You could expect some drivers encroaching into the other lane, and you’ve got to pay attention as you enter the circle,” Tsang said.

Construction will affect north side of roundabout

The north side of the 61/43 roundabout may look and operate slightly differently than shown in the infographics while construction and lane closures continue on Mankato Avenue. Traffic on Mankato Avenue from Highway 61 to Sarnia Street will continue to be shunted, with two opposing lanes diverted onto one half of the street, until construction wraps up this fall. While those construction closures are still in effect, traffic on the northside of the roundabout may be temporarily rerouted, Dougherty said. Watch for orange signs.

Up next: E. Lake Blvd. to reopen, more roundabouts

Along with the opening of the 61/43 roundabout, MnDOT is also planning to reopen East Lake Boulevard. Opening the boulevard will help alleviate traffic flow for residents there, according to Dougherty.

Dougherty said that Winonans will see the other three roundabouts on Mankato Avenue shaping up over the next several months. Currently, the MnDOT contractors are working on the west side of Mankato Avenue and will switch to the east side in the future. Dougherty also said that MnDOT expects the project’s completion late this fall.

A collection of videos, including how-to guides for navigating roundabouts, are available here.

Roundabout opens at Hwy. 61/43 in Winona