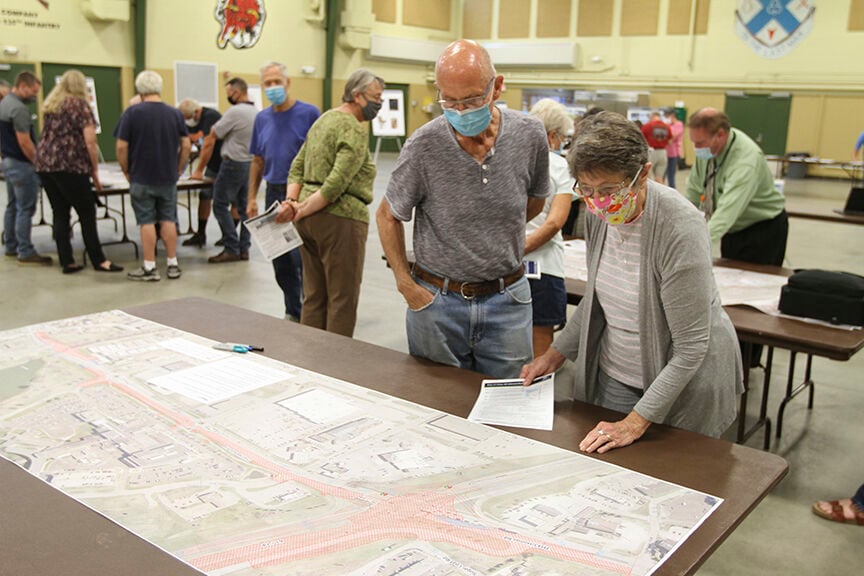 At an August 26 open house, Ruth and Jerry Dalleska looked at the proposed construction staging plan for the Mankato Avenue reconstruction project. 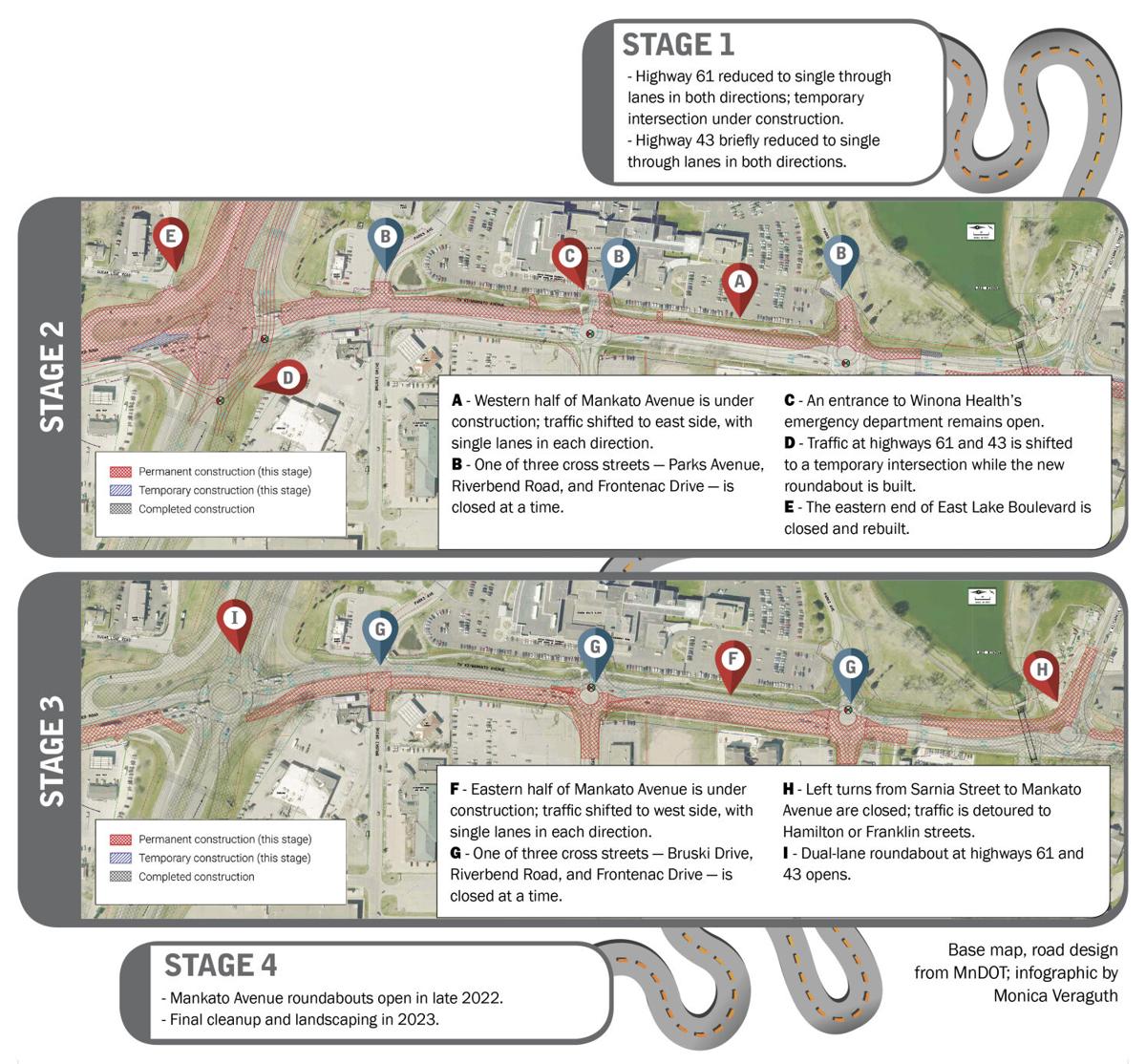 Base map, road design from MnDOT; infographic by Monica Veraguth

At an August 26 open house, Ruth and Jerry Dalleska looked at the proposed construction staging plan for the Mankato Avenue reconstruction project.

Base map, road design from MnDOT; infographic by Monica Veraguth

Some of the most important thoroughfares for Winona and the region — highways 43 and 61 — will be down to one lane in each direction during portions of next year’s Mankato Avenue reconstruction project.

The Minnesota Department of Transportation (MnDOT) is completely redesigning the roadway with four new roundabouts, in part, because it is congested. The traffic from a major shopping district and nearly the entire East End is funneled through the narrow corridor. Needless to say, when half of the road is torn up during construction, that congestion won’t get any better.

MnDOT recently released its plans for routing traffic during construction. Mankato Avenue will be rebuilt one half at a time: First the western half will be torn up and traffic will be shifted to the eastern half of the street, then vice versa. Early in the project, Highway 61 will be reduced to one lane in either direction, and Mankato Avenue will be down to single lanes in each direction for much of next year. Of the three major cross streets — Frontenac Drive, Riverbend Road, and Bruski Drive/Parks Avenue — only one will be closed at a time, MnDOT consultants said. An entrance to the Winona Health emergency department at Riverbend Road will be available at all times, though, at times, there will be no exit at that location, MnDOT representatives said. The eastern end of Lake Boulevard will be completely closed and rebuilt during one portion of the work.

Construction will take a long time. MnDOT engineers are pushing hard to complete the road work in a single season, and expect contractors will be laboring 10 hours a day, six days a week, April through October. Weather could throw off that schedule.

While the exact timing of each stage of construction has not yet been set, MnDOT officials laid out the general order of operations.

In the first stage, starting in April 2022, Highway 61 will see its worst restrictions of the project. Highway 61 will be reduced to one through lane in either direction while crews set the stage for the construction of a dual-lane roundabout. Workers will build a temporary intersection next to the existing one. Later on, that temporary intersection will be used to divert highways 61 and 43, making room for the construction of the two-lane roundabout. Also in stage one, Homer Road will be briefly restricted to a single through lane in either direction.

In stage two, work on the 61/43 roundabout and Mankato Avenue itself begins. “We need to get in and construct that whole roundabout at 61 and 43 all at once,” said Stantec Project Development Team Lead Kevin Hoglund, a consultant for MnDOT. That will also mean closing and rebuilding the eastern end of East Lake Boulevard, leaving Huff Street as the nearest access point. Mankato Avenue and Highway 43 will be cut down to a single through lane in either direction, and Highway 61 traffic will be shifted to the temporary intersection, with one through lane and a turn lane. “That’ll be a little funky in terms of the operation, but it keeps the flow going,” Hoglund said of the temporary intersection.

On Mankato Avenue itself, workers will rebuild the western half of the street and shift traffic to single lanes on the eastern side of the street. West of Mankato Avenue, access to Frontenac Drive, Riverbend Road, and Parks Avenue will be closed on an alternating basis, with two of the three cross streets open at any given time, Hoglund said.

At times, left turns from northbound Mankato Avenue into Winona Health’s hospital will be blocked, and hospital traffic will be detoured behind Target on Menard Road to Riverbend Road, where cars may use a through lane to cross Mankato Avenue and enter the hospital parking lot, Hoglund explained. “At some stages, there just isn’t enough room, physically, to develop a left turn lane,” he explained.

In stage three, the 61/43 roundabout will open to traffic, and Highway 61 will be restored to two through lanes in both directions. On Mankato Avenue, construction crews will repeat stage two, but on the other half of the street, rebuilding the eastern side and shifting traffic to single lanes on the western half. Access to Frontenac Drive, Riverbend Road, and Bruski Drive will be closed on an alternating basis. Stage three will continue through the end of the 2022 construction season. If all goes according to plan, the three roundabouts on Mankato Avenue will open to traffic in October or November.

In stage four, in 2023, MnDOT contractors will complete some final cleanup and landscaping to close out the project, Hoglund said.

This preliminary plan for construction staging is subject to change.

MnDOT officials said they are trying their best to maintain access to businesses along Mankato Avenue. Josh Severson, whose company owns the Severson Sinclair gas station at Mankato Avenue and Bruski Drive, left a meeting on the construction staging late last month with some issues to raise with MnDOT. “My big concern is just having access to our property,” he said. “We’re in the convenience business,” Severson said. If his store isn’t easy to get to, people won’t stop there, he explained.

“There are definitely going to be impacts to traffic during construction,” MnDOT Project Manager Chad Hanson said. “A lot of it is just unavoidable. We will do our best to maintain access,” he added.

In engineering jargon, a free-flowing road with no congestion would get an A or B grade for its “level of service,” while bumper-to-bumper backups might earn a D, E, or F. Assuming a quarter of Mankato Avenue’s normal traffic avoids the road work entirely, MnDOT estimates the road will earn a barely passing grade during construction. “We’ll have a non-failing level of service, but it’ll still be congested because it’s down one lane,” Hoglund said.

For people trying to get out of town and not looking to stop at any businesses on the corridor, DeFrang recommended Winonans take another route to reach the highway. At the same time, he urged, “Please, please, please, frequent these businesses.”

“Is there anywhere else in Minnesota where you have four roundabouts in a row like this?” Winona City Council member Pam Eyden asked Hoglund at an August 26 open house. “This is going to be a little unique for Minnesota,” Hoglund acknowledged. The dual-lane roundabout at highways 43 and 61 will be one of busiest roundabouts in the state when it opens. Hoglund said a similar, successful set of roundabouts in Golden, Colo., served as the basis for the design.

“It’s a lot for people to take in all at once,” Eyden said of the plan for the new roadway post-construction. While roundabouts are becoming more common across the U.S., she said, “There are people in town who have never lived anywhere else. They have never been outside the state, and for them it’s going to be very confusing at first.” Eyden said she understood the need for the design. “Something big needs to happen so we can go ahead with development,” she said. However, she encouraged MnDOT officials to prepare some public education efforts on how to navigate roundabouts.

MnDOT officials said they plan to install posters on how roundabouts work at neighboring businesses during construction, and they steered Winonans to http://www.dot.state.mn.us/roundabouts. “With the pavement markings and with the advance signage, we’re going to really do our best to make it clear to people,” Hanson said.