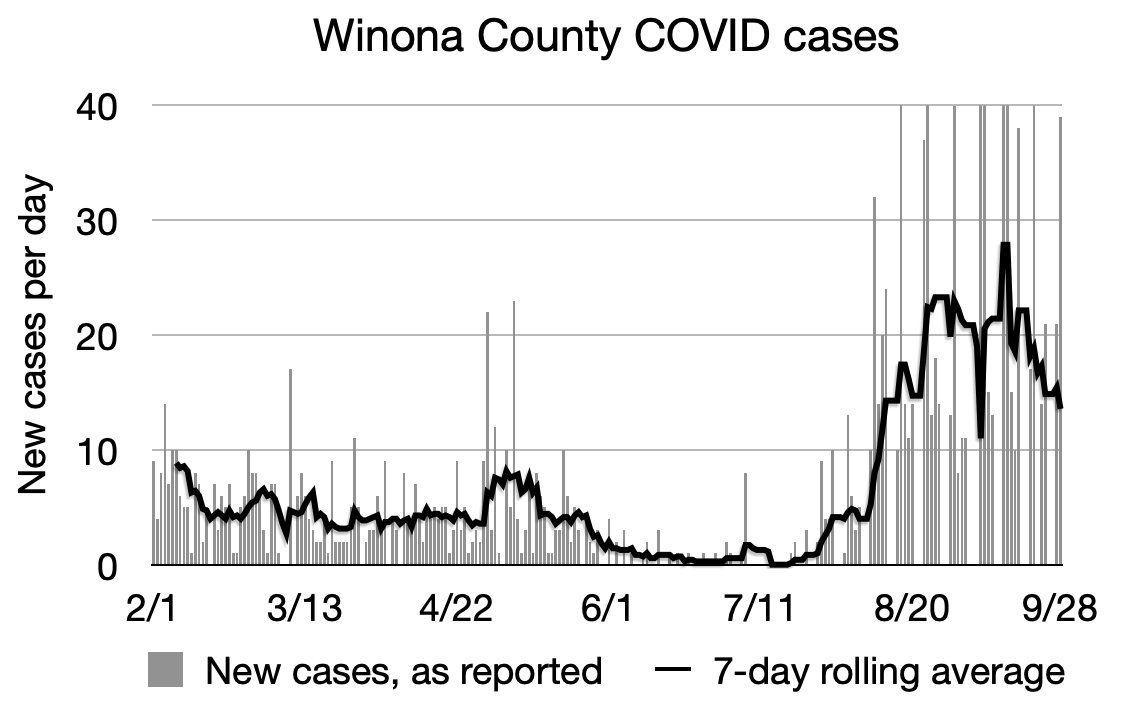 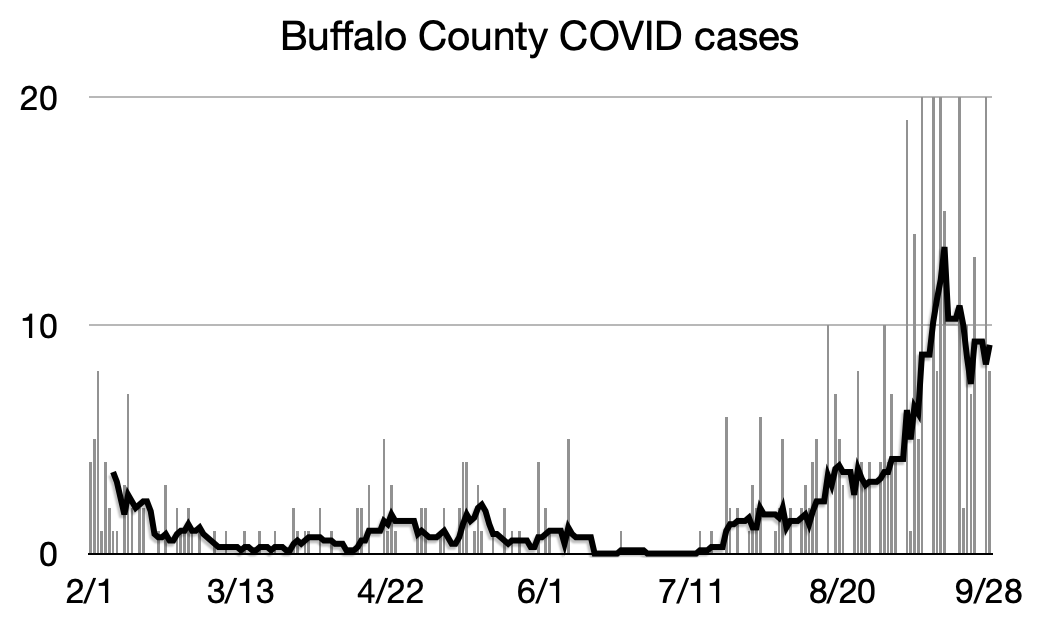 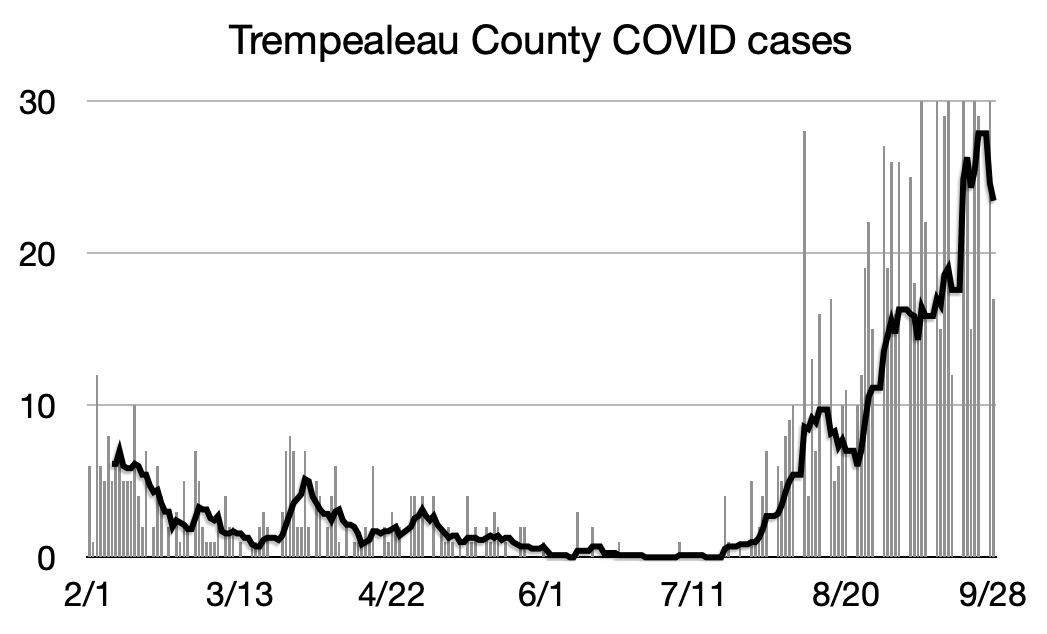 The Winona County Board’s proposed mask mandate is still in the works, but not the fast lane. An initial vote will be delayed until at least October 12 while county officials iron out ordinance language. County staff said the soonest the County Board could hold a public hearing and take a final vote on the measure would be the end of October. It could take until November.

However, other county staff members are still reviewing the ordinance, and County Administrator Ken Fritz said, “There was some language that I thought needed to be clarified.” Fritz was unsure if the draft ordinance would be ready for the County Board’s October 12 meeting. Either way, the timeline for a final vote will be later than expected.

Once the County Board finalizes the proposed ordinance, the county must hold a public hearing before taking a final vote to approve the ordinance. The public hearing must be advertised 10 days in advance.

So, if the ordinance is ready for the October 12 meeting, the soonest a hearing and final vote could be held is late October, Fritz said. However, it could take staff longer to prepare the ordinance, or the County Board may want to change draft ordinance. “It could go into November,” Fritz said.

If the proposal comes to fruition, Winona County would be the first county in Minnesota to impose a mask mandate since Gov. Tim Walz’s statewide order expired this summer. County Board members Steve Jacob and Marcia Ward have strongly opposed a mask requirement. “Where is our emphasis on vaccinations?” Ward asked at an August meeting. “It seems like every page and every turn, we’re promoting masks.”

Winona Mayor Scott Sherman urged the County Board to adopt a mask order before issuing his own short-lived order last month. The Winona City Council voted 4-3 to revoke it. “Masks and vaccines should remain a personal choice,” City Council member Steve Young said.

However, County Board members Marie Kovesci, Greg Olson, and Chris Meyer supported a potential mask mandate. In interviews earlier this month, Olson and Meyer said they are still interested in pursuing it, while noting that the situation on the ground could change by the time an ordinance is ready for final approval. “I am mostly interested in public safety,” Meyer said. “[Masking] is not 100 percent, but it is one more chance to reduce the amount of spread.”

Sonneman’s proposed ordinance is grounded in state law. Minnesota Statute 145A.04 gives counties the power and duty to “preven[t] the spread of communicable disease by … preventing the transmission of infectious diseases, and implementing control measures during infectious disease outbreaks.” In one version of her proposed ordinance, the control measure is spelled out: a mask mandate. Another version would give the County Board more open-ended powers to respond to a public health emergency now or in the future, with a mask mandate being one possible usage of those powers.

Asked if there would be any limit on what measures the County Board could take under the more open-ended ordinance, Sonneman said there would need to be balance between the county’s responsibility to prevent communicable disease and its responsibility to not overreach. “It’s kind of finding that point where you don’t go so far and abuse your powers,” she said.

Previous court cases have challenged governments’ emergency health powers with mixed results. In some cases, courts found that health regulations violated citizens rights or that government officials exceeded their authority, while in many others, courts gave governments wide latitude to protect the public from disease, including a 1905 U.S. Supreme Court case supporting states’ powers to require vaccinations against smallpox.

Local COVID infections continued a downward trend in Winona and Buffalo counties this past week. Winona County’s seven-day total fell to 95 infections as of Tuesday, down from 132 last week and 195 two weeks ago. Buffalo County’s saw 64 new infections this week, down slightly from 70 last week.

Trempealeau County’s rapid uptick in infections also showed some signs of slowing this week. The county had 164 infections in the past seven days, down from 184 last week, but still significantly higher than its 116 infections per week in mid-September.

Santa is coming to the Holiday Market in Winona