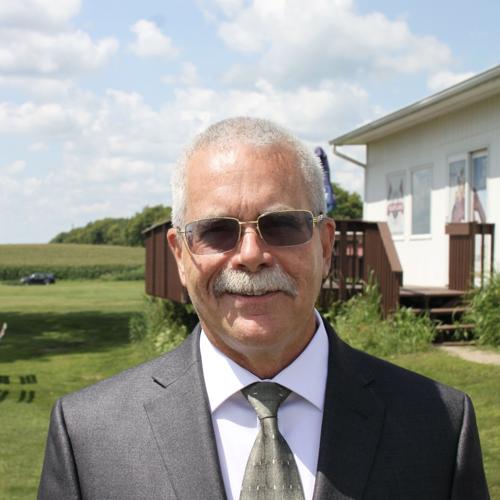 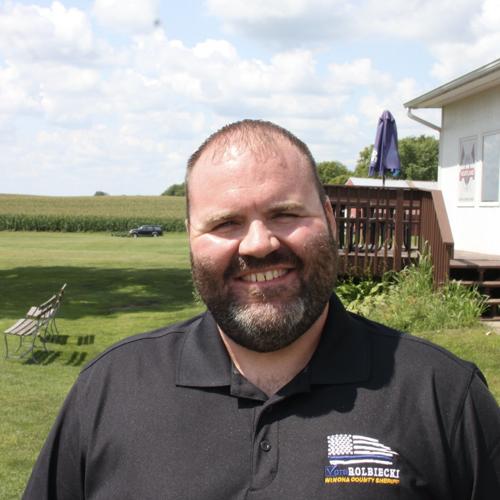 Their signs are everywhere — “Reelect Ron Ganrude” in orange and “Vote Charles Rolbiecki” with a Thin Blue Line symbol — but the two hopefuls for Winona County Sheriff made their first candidate forum appearance of the race last week at a Lewiston Chamber of Commerce event. Incumbent Ron Ganrude stressed his experience and accomplishments, while challenger Charles Rolbiecki focused on community policing and proposed new roles for deputies.

The sheriff is the head of the largest law enforcement agency in the county, oversees a dispatch center and jail that serves every community in the county, and leads Winona County’s second largest department, with a budget of roughly $7 million and the equivalent of 60 full-time positions.

First elected as sheriff in 2014, Ganrude has worked 42 years in law enforcement, including 36 with the Winona County Sheriff’s Office (WCSO), serving as a patrol deputy and a night shift lieutenant, where he supervised deputies, dispatchers, and jailers. He was the chief deputy for 16 years under former Sheriff Dave Brand and helped start the local SWAT team. “I’m well-rounded through the department,” Ganrude said.

A Winona County native who loves to hunt and fish, Rolbiecki currently serves as a civil process deputy — meaning he serves court notices and handles civil disputes — a patrol deputy, and a leader with the water patrol. He has worked for the WCSO for the last 15 years, following stints with the Caledonia Police Department and Goodhue County Jail. Rolbeicki said he helps train part-timers on the water patrol and serves as the lead deputy for his patrol shift. “I grew up here. I’ve always wanted to take the reins,” he said.

“From my perspective, that’s why I want to get reelected,” Ganrude said of finishing the jail project. The county’s new jail is under construction and on schedule to be completed next summer. “I’ve been involved in three jail studies [over my tenure],” Ganrude said, “and all three studies said, ‘You need to build a new jail.’” For years, previous County Boards were “kicking the can down the road,” he said, until a Department of Corrections order all but shutting down the substandard, old jail forced the County Board’s hand. Ganrude added that the design of the new jail will improve safety for inmates and deputies. He also touted accomplishments such as adding body cameras, replacing unlicensed court security with licensed deputies, and securing grant funding for more DWI enforcement.

“I think we need to go to more events and be more involved with the community,” Rolbiecki said. He said he would like to see a recreation officer added to the WCSO, a deputy who would focus on working with DNR conservation officers on ATVs and outdoors-related issues. “Red Wing has three people that just work the river full-time,” Rolbiecki said. He added that he would like to see deputies in local schools. “I think that needs to be looked at hard,” he said, adding, “I think it’s important with everything going on today, the violence.”

A different department — the Winona Police Department — previously provided a school liaison officer at Winona Area Public Schools, but the School Board nixed the position in 2020following a Department of Human Rights discrimination investigation.

Ganrude said that, years ago, the WCSO had D.A.R.E. officers in schools, but the program ended due to lack of interest by the schools and personnel changes.

Audience members asked the candidates about how they would deal with pressure to be lenient. One Lewiston businessman asked, “With what’s happened in the metro … I’ve seen cops are afraid to pull people over anymore … Are we just going to let stuff slide because we’re afraid to be called racist?”

“I like my deputies to be proactive … I expect them to stop the violators,” Ganrude said. He continued, “I’ve always preached, ‘We need to be visible.’” When COVID hit in 2020, concerns about losing too many deputies to sickness or quarantine forced the department to go against that mantra and tell deputies not to stop people unless they had to, he explained. “For a year, a lot of things were handled by phone that I would have never imagined handling by phone,” Ganrude said. He added that criticism of police has created a “double whammy,” but that he is encouraging deputies to get back to proactive policing. As for citizen complaints, he said body cams have helped with responding to those and usually the footage vindicates the officers.

Rolbiecki also said deputies need to be proactive. “You don’t have to write everyone a ticket; be educational,” he said. Officers should explain why they are stopping people, but, he said, “You’re still stopping them, though.” Rolbiecki continued, “Be friendly with people … they can yell at me all they want, but I try not to get to that level with them.” He added, “I think it’s important that you get out there and still do it, but it’s important that you be professional and explain why you’re doing it.”

Both candidates have focused on community policing in their campaign literature.

“[Officers] should be a permanent fixture in our communities and not viewed as only present when there is something negative happening,” Rolbiecki wrote on rolbiecki4sheriff.com. “To achieve this, it is vital for officers to get out of their patrol cars and be more active in meeting citizens and business owners and participating in community events. Not only will they begin to gain trust in each other, but they can hear concerns and better understand the community’s needs through mutual respect and the sharing of information.”

Similarly, Ganrude wrote on reelectganrude.com, “It remains Ron's vision for our office to be visible in the Winona community … He wants there to be positive relationships between the community and the officers that serve them. As a result, he requires his officers to have dialogues every day with members of the community. Deputies are to speak to individuals going about their daily lives and show that the officers protecting them are also community members who want to know the individuals they serve.”