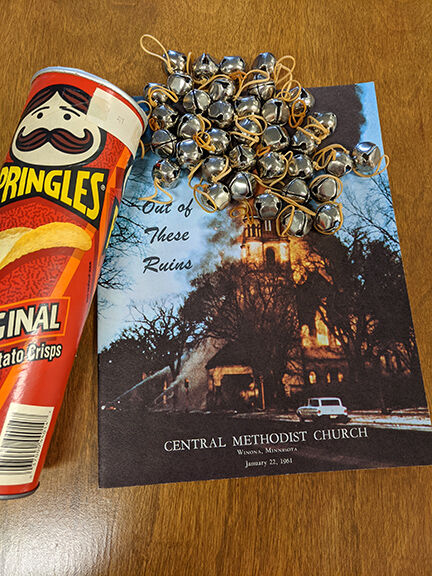 The author rediscovered small bells John Duel gave visiting children tucked away in old Pringles can. A church yearbook cover features the 1961 fire, when Duel said he begged firefighters to let him play the bells while the church was ablaze, as a sign of hope and encouragement. They refused. 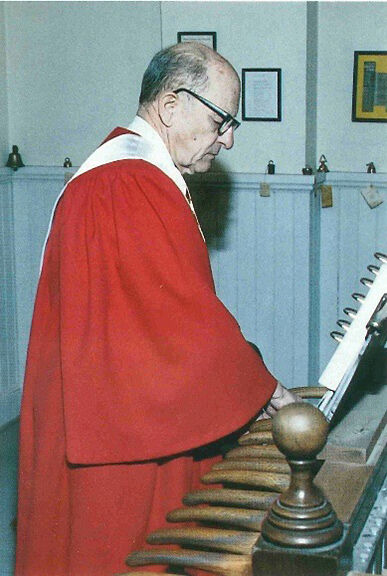 The late John Duel was a longtime carillonneur, or bell player, for Wesley United Methodist Church in Winona. 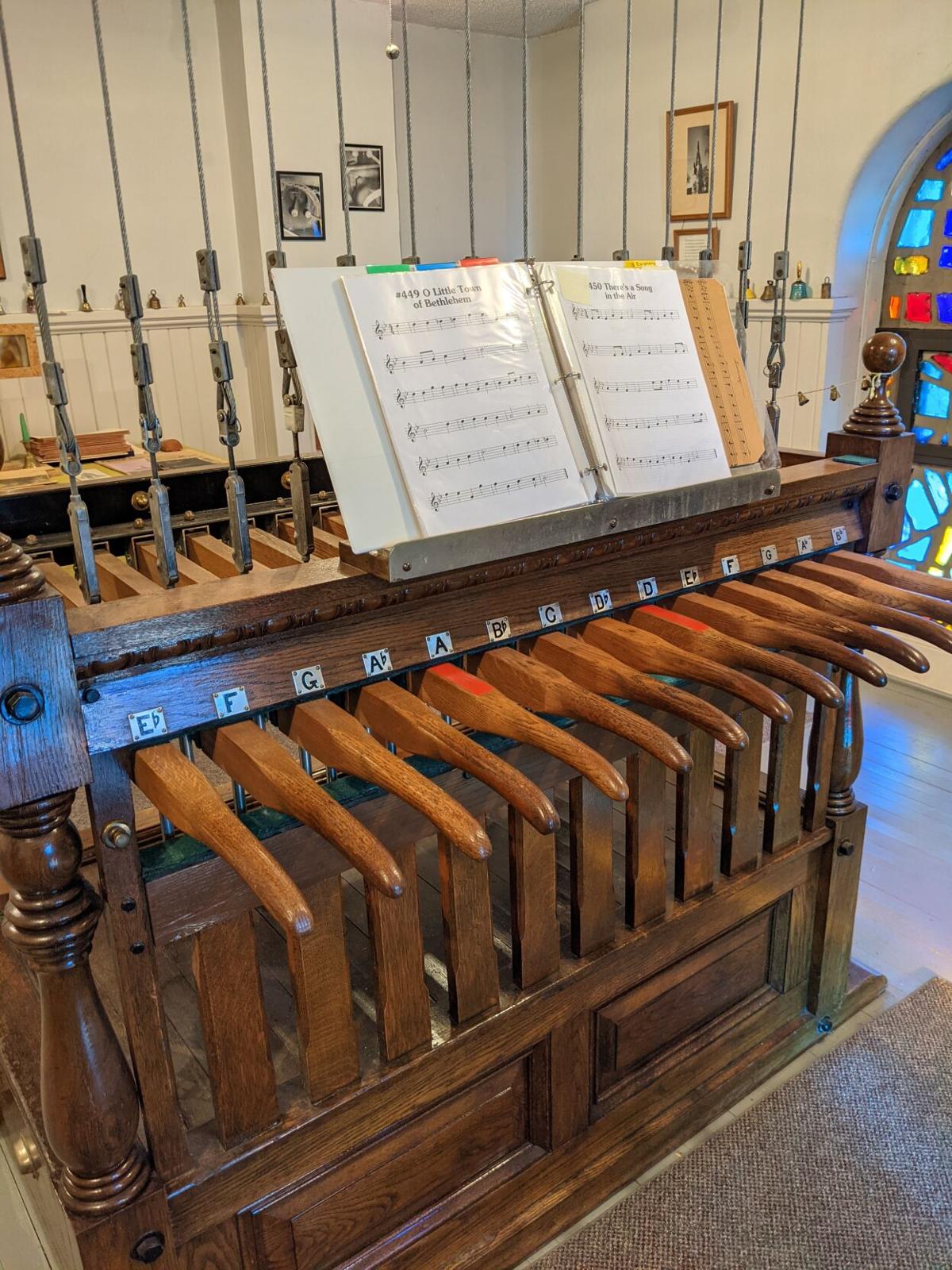 Wooden paddles act as the keys for a bell player. When you are inside the bell tower, all you can hear is a soft swish and a muffled thump as the paddles are depressed. You have to open up a window to actually hear the bells. 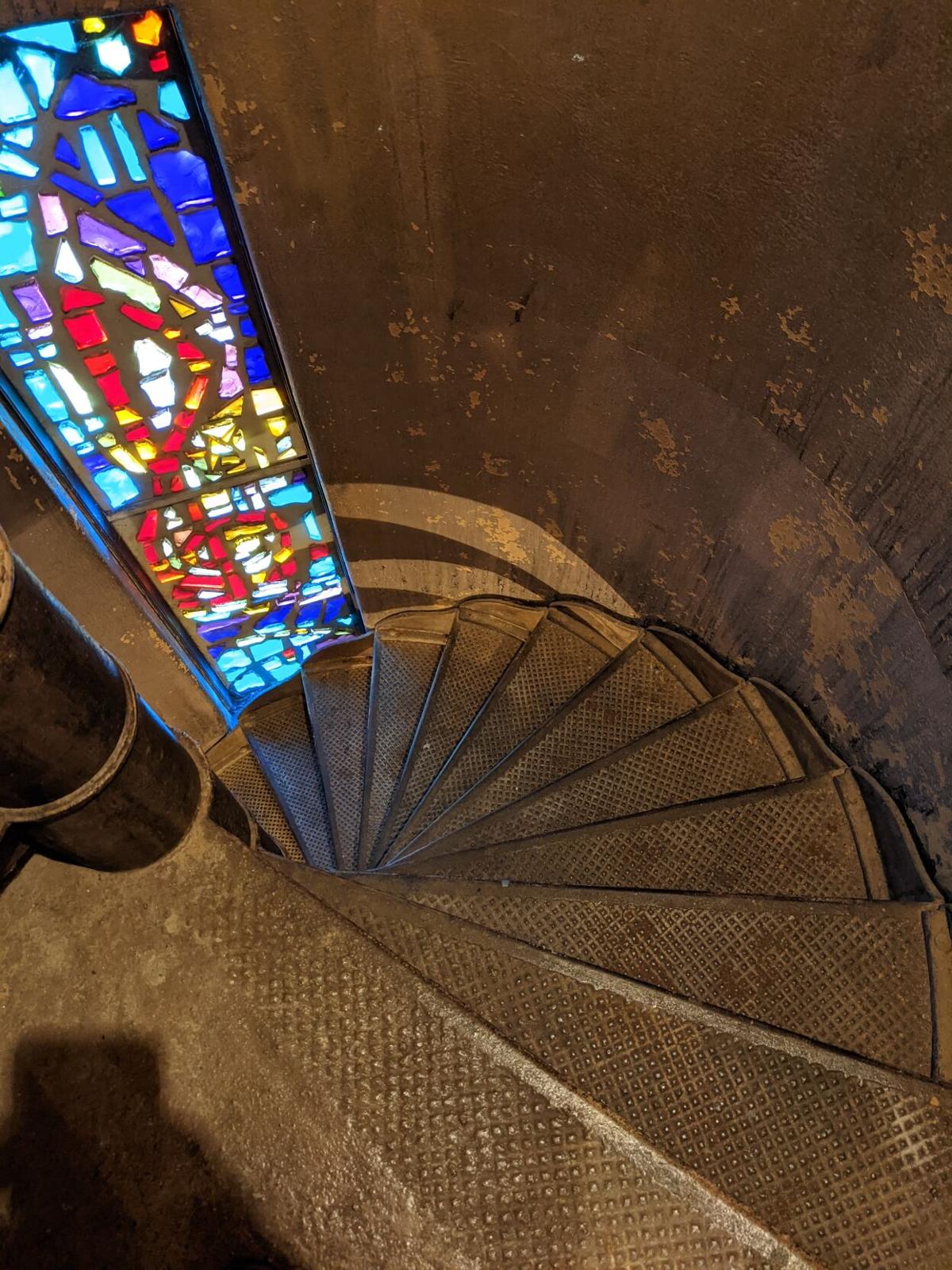 A steep spiral staircase with no handrail leads up to the bell tower.

The author rediscovered small bells John Duel gave visiting children tucked away in old Pringles can. A church yearbook cover features the 1961 fire, when Duel said he begged firefighters to let him play the bells while the church was ablaze, as a sign of hope and encouragement. They refused.

The late John Duel was a longtime carillonneur, or bell player, for Wesley United Methodist Church in Winona.

Wooden paddles act as the keys for a bell player. When you are inside the bell tower, all you can hear is a soft swish and a muffled thump as the paddles are depressed. You have to open up a window to actually hear the bells.

A steep spiral staircase with no handrail leads up to the bell tower.

“I heard the bells on Christmas Day

And wild and sweet the words repeat

Of peace on earth good will to men.”

Where can the spirit of Christmas be found? Is it in a child’s eyes, or under the tree, or in a church pew? This year, my first taste of Christmas cheer was served up in a red Pringle’s can filled with tiny silver bells — John Duel’s bells.

After much “encouragement” from those who love me, I was finally digging into a task that filled me with dread: cleaning and organizing my closet. I am a superstitious packrat, and my bedroom closet is stuffed with “treasures” from the past. Armed with heavy duty trash bags and a resolve to be a brutal downsizer, I began sifting through the vintage newspapers, baseball card collections, Twins bobbleheads, signed baseballs, and mementos from the Twins 1987 and 1991 World Series victories. After about an hour of sorting I had a lot more items in my “saved” boxes than in the trash bag. My favorite keepsake was a flip-book of Kirby Puckett’s walk-off home run in the sixth game of the Twins epic ’91 World Series. They might have to bury me with that one.

It was time to tackle the bureau that I had planted against the back wall of the closet. I took a deep breath, because I knew that was where I had packed away eclectic possessions that I didn’t want to throw away, but had no real home for. The top drawer yielded the fur hat that I was presented with for being named “Jack Frost of the Jaycees Winter Carnival” (my son James has dibs on that), a layout of a newspaper ad we ran when my son Michael was born, photo albums of Al Smith’s baseball dinners and Vikings’ trips, a cribbage board … and a Pringles container. I popped the lid and poured out a handful of small silver bells. Their cheerful jingling transported me to a powerful, pleasant memory of a past Christmas season.

The YMCA had a youth program in those days, and I was a leader of one group. It was a wonderful opportunity for dads to bond with their pre-teen daughters, and it was a priceless time well spent. We had some unforgettable camping trips, including enormous pallet bonfires and a visit from the “fire god” (Steve Slaggie) and his amazing pyrotechnic displays. We held monthly meetings where we were encouraged to do crafts and go on field trips. Trust me. Other than making, and sewing patches on our vests, we avoided the crafts and concentrated on taking the girls to cool, interesting locations.

I was looking for a December field trip and somebody mentioned that the bell tower at Wesley Methodist was open for tours and demonstrations while the bells tolled with daily concerts at 5 p.m. I booked the tour with John Duel, the church’s carillonneur, and he seemed not only friendly, but actually eager to meet with us.

We arrived at 4:45 p.m. and walked through the brightly decorated church to the entrance to the bell tower. We opened the door, and to my surprise, were greeted by the sight of a very scary metal spiral staircase with no handrails. What little Christmas spirit I was still able to muster after struggling through the hectic chaos of a media holiday season quickly dissipated. Suddenly my number one goal was getting my group up and down the stairs with no casualties. We all took our time, using the upper stairs for handrails and arrived in a very pleasant room. It was warm, well lit and welcoming, and the carillon was surrounded by a unique collection of hand bells.

Once we settled the group around the carillon, we met the star of the show. John Duel had dedicated 50 years to enhancing the fabric of Winona’s lifestyle, with his mastery of the 14 bells in the Wesley bell tower every day at 5 p.m., and before the Sunday church service. He had stories to tell, and a concert to play. My daughter, Sarah Jane Marek Landman, has this memory to share of the experience.

“I remember so much about it,” she said. “The beautiful Christmas decorations at the church and the winding stairs up to the bells looked like something out of a fairy tale. Mr. Duel was so excited to share his love of the bells with us. Meeting him and learning some of the secrets about how the 5 p.m. bells worked added to the magic of our Christmas that year.”

John told our group about the time in 1948 when he climbed up the 20 steps to the belfry to get a tutorial from the carillonneur about how to play the bells. She never showed up, but he learned on the fly and played his first concert at 5 p.m. that day. Eventually he performed over 14,000 concerts for the neighborhoods of Winona. He was a former music teacher at what was then Central Junior High School, and played several instruments, but had a passion for the bells. He explained that the carillon was a sturdy oak console with 14 four-foot wooden handles equipped with clappers that are connected by silver “airplane wire” to the bells 140 feet above.

The bells were purchased and installed in 1907. They were cast in New York by the Meneely Company and have a total net weight of over 11,000 pounds. Each bell carries an inscription from the bible on its outer surface. The first bell proclaims: “O come, let us sing unto the Lord.” The ninth bell appropriately is inscribed with: “Glory to God in the highest and on Earth peace, goodwill towards men.”

The bells all survived the church’s great fire of 1961. Most of the rest of the church was destroyed, but that didn’t stop John Duel’s dedication to keeping his chimes ringing. John told us that he begged the firefighters to let him play the bells while the church was ablaze, as a sign of hope and encouragement. They refused. After the fire was first extinguished he tried to climb the stairs, but they were covered with ice and were impossible to navigate. Finally, three days after the fire, he scaled the staircase, endured the freezing temperatures and let Winona know that, despite tragedy, the bells endured.

Duel played “Oh Little Town of Bethlehem” at 5 p.m., and let all of us play a song, even the adults. Each paddle has a letter of the alphabet assigned to it, so he made it easy, calling out letters to songs he had memorized over 50 years.

When you are inside the bell tower, all you can hear is a soft swish and a muffled thump as the paddles are depressed. You have to open up a window to actually hear the bells. John let us open the windows, and we were able to make a little Christmas magic for Winona that night. As we left, he gave all of the girls a small bell and encouraged us to substitute for him in the future.

By the time I got to the bottom of the stairs, I was filled with so much Christmas spirit that I wanted to find Tiny Tim and feed him a turkey dinner.

I was able to take my son Mike and our band of YMCA Voyagers up to the bell tower for another December holiday infusion. Mike has fond memories of the experience, and I got to play “Go Tell It on the Mountain.” John Duel was just as gracious and engaging as he was the first time, except he told us that he had run out of bells and had nothing to give us to remember him by.

One summer afternoon later the next year, our receptionist handed me a Pringles canister. It was filled with bells and had a note from John Duel: “So sorry I didn’t have bells for everyone, please distribute these and help them remember me, and the time they got to play our bells.”

Our group was small, and the program had folded earlier that year, so I have a lot of John Duel’s bells. I will gladly share them with whoever asks. John Duel passed away in 2000, an accomplished teacher, respected scoutmaster, talented musician, and dedicated carillonneur. For over 50 years he called children to dinner, helped celebrate church and secular holidays, and most of all gave us all a moment at the end of the day to take a cleansing breath, count our blessings, and embrace the music of the bells.