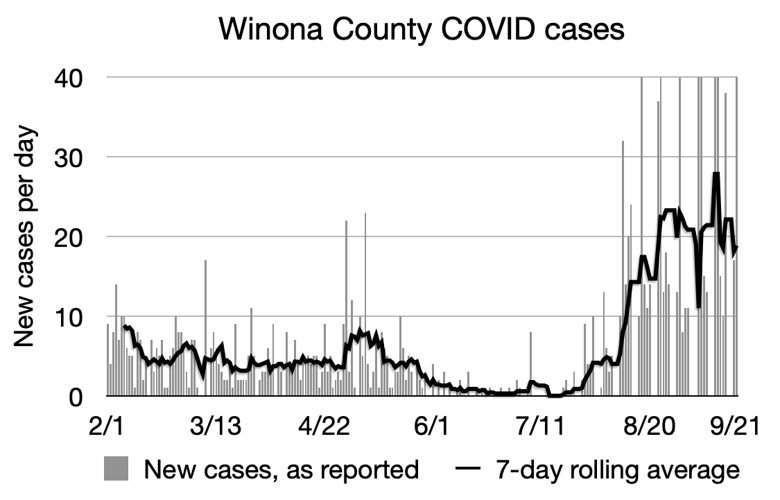 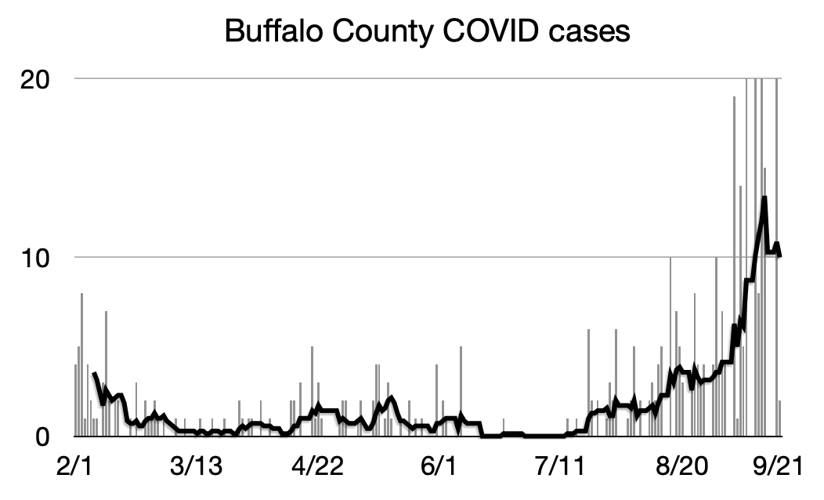 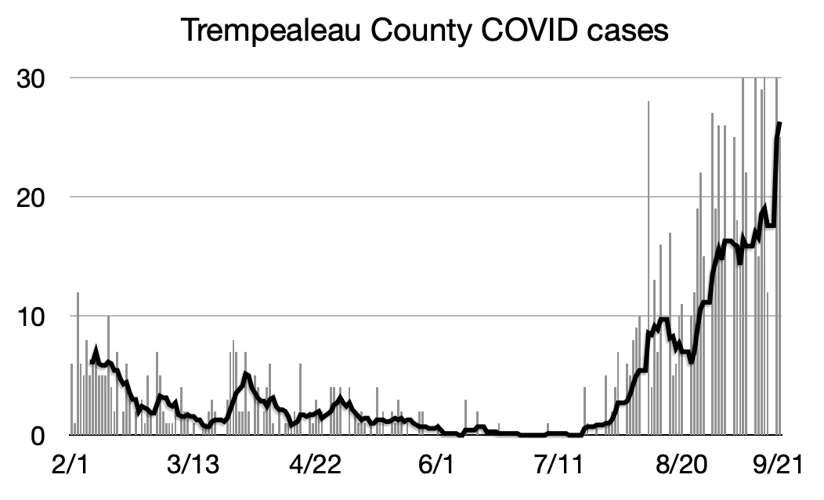 Statewide, infections are rising slightly in Minnesota and climbing rapidly in Wisconsin. On the local level, after hitting a high last week of 195 cases in one week, Winona County’s weekly infections declined somewhat this week, with 132 new cases in the last seven days. However, on a 14-day time scale, Winona County infections are still climbing.

In Trempealeau County, the trend is clear: cases are rising. There were 184 new infections reported this week, up from 116 last week.

Winona County officials were unsure whether the recent numbers represented the beginning of a change in the trend or just a temporary blip in an ongoing surge.

“I think it’s too soon to tell,” Winona County Emergency Manager Ben Klinger said. “It’s looking to me that it’s plateauing, but we haven’t seen a decrease yet. It’s definitely not climbing as fast, so my hope is that we’re coming to the point where it’s not climbing, but it’s not declining yet either.”

“I was also very excited to see that we’re on a slightly downward trend,” Winona County Public Health Supervisor Melanie Tatge said. “However, what we’re hearing from MDH [Minnesota Department of Health] is that Southeast Minnesota is having the most cases reported [in the state].” Winona County infections are also still at one of the their highest levels of the pandemic, she noted. “That tells me that the surge is not over yet,” she said.

Meanwhile, hospital capacity remains tight. Southeast Minnesota intensive care units are still at 95.5 percent of their maximum capacity and standard hospital wards are at 94 percent, according to the state. Regional hospitals have been nearly full for the last few weeks.

“It’s very limited,” Klinger said of hospital capacity. Winona Health is doing well, but look at critical care hospitals in the region and it’s a different picture, he said.

According to the U.S. Centers for Disease Control, seven Trempealeau County residents were hospitalized for COVID last week. Winona County reported one new hospitalization in the last week. Buffalo County did not release updated figures this week.

“What we’re hearing from medical providers is that their COVID-19 units are still full, they are still sometimes on diversion,” Tatge reported.

Bottom line, Klinger said, “I think people should be cautious, looking at any mitigation steps they can take. If you can be outside when you’re talking to people, you should be outside. The MDH and CDC say you should wear masks. Vaccination, though, is the key. People need to get vaccinated if they’re eligible.”

“The actions we take now — especially as we approach colder weather, as we approach the holiday season — really have control over where things go,” Tatge said. She continued, “Do the things we’ve been saying all along. The first line of defense is people rolling up their sleeves and receiving the COVID-19 vaccine … and not just one dose, but the full series. If you have any signs or symptoms or have been identified as a close contact, seek out that testing, and stay in your home and do not have interactions with other people until you get that negative test or those signs and symptoms lessen.”

Lanesboro Arts kicks off concert series with Kiss the Tiger